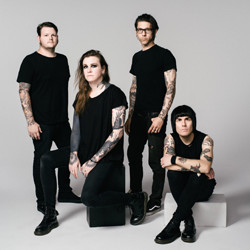 The rock band Against Me! was formed by Tom Gabel in Naples, Florida in the late 1990’s. Following the release of a 1997 demo, titled Against Me!, Gabel joined forces with Kevin Mahon and additional demos and EP’s followed….

PrevPreviousAFI
NextAlabama ShakesNext
Start by filling out our no-obligation application form below to check terms and availability for Against Me or any celebrity of your choosing.
Want to talk about your meetup now? send your message to ([email protected]) and one of our standby agents will be happy to help you immediately.

The rock band Against Me! was formed by Tom Gabel in Naples, Florida in the late 1990’s. Following the release of a 1997 demo, titled Against Me!, Gabel joined forces with Kevin Mahon and additional demos and EP’s followed. Eventually Mahon was replaced by Warren Oaks with the addition of James Bowman, and Against Me! Is Reinventing Axl Rose, the band’s debut, was released in 2002.

Additional albums followed: Against Me! as the Eternal Cowboy (2003), Searching for a Former Clarity (2005), New Wave (2007), and White Crosses (2010), with the band’s sophomore effort rising into the Top 40 on the independent albums charts. The albums spawned the singles: “The Disco Before the Breakdown,” “Cavalier Eternal,” “Sink, Florida, Sink,” “Don’t Lose Touch,” “From Her Lips to God’s Ears (The Energizer),” “White People for Peace,” “Thrash Unreal,” “Stop!,” “New Wave,” “I Was a Teenage Anarchist,” “High Pressure Low,” and “Russian Spies/Occult Enemies.”

In 2012, founding member Tom Gabel went public with his transgender struggles, and began the transition to live as a woman. Gabel has since taken the name Laura Jane Grace, and with current Against Me! members James Bowman and Atom Willard (who joined the band in 2013), Grace has returned to the studio for the recording of the band’s next release, Transgender Dysphoria Blues.

Against Me! continues to perform and record with the current lineup of Laura Jane Grace, James Bowman, Ingie Johansoon, and Atom Willard. In recent years the band has also launched Total Treble Music, their own record label. The band’s seventh and most recent album, Shape Shift with Me, was released through this label in 2016.

Apply now to connect with — Against Me