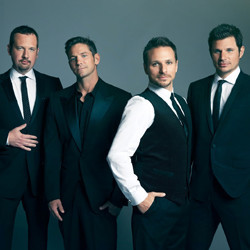 PrevPrevious6lack
NextA Great Big WorldNext
Start by filling out our no-obligation application form below to check terms and availability for 98 Degrees or any celebrity of your choosing.
Want to talk about your meetup now? send your message to ([email protected]) and one of our standby agents will be happy to help you immediately.

The adult contemporary, “boy band” group 98 Degrees was established in Ohio by founding members Nick Lachey and Jeff Timmons. After recruiting Justin Jeffre and Nick’s younger brother Drew, the four boys all relocated to Los Angeles and began perfecting their performances together as a group. In the wake of success from such similar groups as Boyz II Men and Take 6, 98 Degrees did not have difficulty garnering the attention of industry executives, and so by 1997 they’d signed their first deal and released a debut single, “Invisible Man,” which rose to the top of the charts.

98 Degrees released their debut album shortly thereafter, and on the heels of an appearance in the hit Disney movie Mulan, the album reached multi-platinum status in 1998. The album spawned two more hit singles, “The Hardest Thing” and “Because of You,” and for the next five years 98 Degrees released a series of successful albums: 98 Degrees and Rising (1998), This Christmas (1999), and Revelation (2000), before embarking on a hiatus. During this time, 98 Degrees landed multiple singles at the top of the charts, including: “I Do (Cherish You),” “This Gift,” “Give Me Just One Night,” “Me Everything,” and “Thank God I Found You,” a collaboration with Mariah Carey which earned the group a Grammy nomination for Best Pop Collaboration with Vocals. While on hiatus, Nick Lachey married singer Jessica Simpson, spawning their own hit reality show and a number of television specials. Timmons also launched his own solo career, and Jeffre briefly went into politics.

Then, in 2012, 98 Degrees regrouped after a live performance at the Mixtape Festival in Pennsylvania. The success of the event encouraged the group to re-enter the studio to record another studio album, their first in nearly a decade.
The album, 2.0, arrived in 2013, and later that same year 98 Degrees embarked alongside Boyz II Men and New Kids on the Block for “The Package” tour, which ran until the summer of 2013.

In total, thus far 98 Degrees sold more than ten million records and charted eight singles in the top forty. The group now continues to perform and record. They recently released the seasonal album Let It Snow (2017), and launched a Christmas tour for the holiday season of that year. The tour comes after an extensive 2016 tour, the My2K Tour, which featured 98 Degrees along with co-headliners Dream, O-Town, and ryan Cabrera.

Apply now to connect with — 98 Degrees