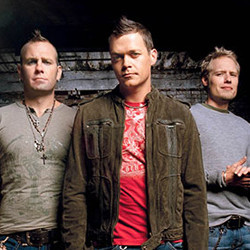 PrevPreviousAnthony Hamilton
Next30 Seconds To MarsNext
Start by filling out our no-obligation application form below to check terms and availability for 3 Doors Down or any celebrity of your choosing.
Want to talk about your meetup now? send your message to ([email protected]) and one of our standby agents will be happy to help you immediately.

The American rock band 3 Doors Down was established in 1996 by founding members Matt Roberts, Todd Harrell, and Brad Arnold. While many bands struggle to find success later down the line, 3 Doors Down found significant success with their first single, “Kryptonite,” released even before the band had signed with a label of released a debut album.

The song “Kryptonite” became on of the most requested singles of the late 1990’s, garnering 3 Doors Down the attention of Republic Records, with which the band signed in 2000. After signing with Republic, 3 Doors Down released their debut album, The Better Life, which also featured the song “Kryptonite.” On the strength of the single, plus the additional songs “Be Like That,” “Duck and Run,” and “Loser,” the album went on to become one of the top selling albums of the year in 2000, reaching triple platinum status.

3 Doors Down followed up the success of The Better Life with Away from the Sun, which exceeded the success of the band’s debut, selling four million copies worldwide. Since that time, 3 Doors Down has released the albums: Seventeen Days (2005), 3 Doors Down (2008), and Time of My Life (2011.) The albums have spawned the additional top forty hits: “When I’m Gone,” “The Road I’m On,” “Here Without You,” “Let Me Go,” “Behind Those Eyes,” “Landing in London,” “Citizen/Soldier,” “It’s Not My Time,” “ Train,” “Let Me Be Myself,” and “When You’re Young.”

3 Doors Down continues to perform and record with the current lineup of Brad Arnold, Chris Henderson, Greg Upchurch, Chet Roberts, and Justin Biltonen. The band is expected to return to the studio for another album, scheduled for release in the next few years.

Apply now to connect with — 3 Doors Down